Review: “Highest of Highs to Lowest of Lows: My Battles With Bipolar Disorder” by Michael Kinyanjui

Interesting review of one man’s articulate bio of living with and coming to understand bipolar disorder, formerly called manic depression –

By Michael Kinyanjul via Christoph Fischer 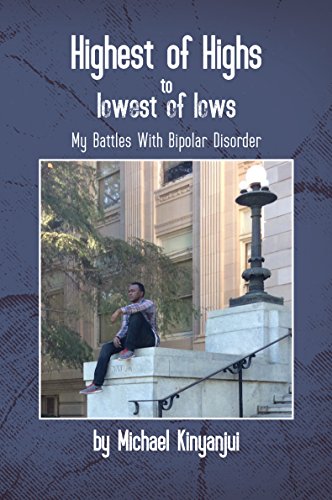 This is a really impressive memoir, in part of what the reader can learn about bi-polarism and how it affects a person; in other parts it shows a writer insightful enough into the psyche of non-affected people to explain his feelings in a manner that grant us eye-opening and aha moments.
I have friends who suffer with the condition who didn’t have the gift to explain things as well as the author. Not following an entirely linear approach we get thrown in at the deep end and unwrap childhood and other ages later. Taking an extreme moment in the author’s young life, being arrested and imprisoned, as the starting point gives us an immediate sense of the volatility of the condition and brings in more than a mere sympathy perspective. How to make the police offers understand, the judge understand, anyone understand the difference between criminal activity and mental health…