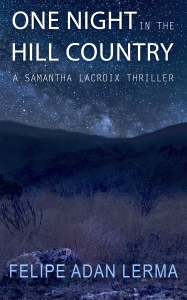 One Night in the Hill Country

This is a quick read as it is a novella and yet it covers some important social issues, such as child abuse and discrimination against immigrants.

Sam, a recently ex-police officer, is called by Katarina because her son Zilker has lost a kitten. Although Sam knows there’s little chance of finding the kitten, she offers to take Zilker and his brother to Central Texas to search for it, and she ends up taking their two cousins as well.

It is a pleasant day out and the party bump into Sheriff Mike Sullivan, who is relevant later on in the story. Continuing with their search for the kitten, Sam and the children visit Rolf and Tara’s vineyard, but all is not what it should be and they are in great danger.

This story is well told and the author has a confident `voice’. The characters and places are clearly drawn and some of the events make you hold your breath.
One Night in the Hill Country is an excellent book and I recommend it as a ‘must read’.

“a beginner’s view: the intent of this blog is to incrementally build a body of thought that works toward integrating various topics, yoga, fitness, and the arts – it’s a process…”

Jump-Cuts : A Style for Short Chapters and Point of View and Setting Shifts 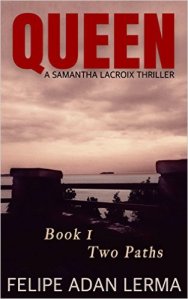 Below is another in a series of posting leading to the eventual publication of my second thriller, Queen.

Set in Vermont, my wife’s home state, which we visit when able, and lived in for about a year and a half, the characters from my first thriller, One Night in the Hill Country, get into another dangerous exciting situation, this one involving drug dealers.

This is another sample from my revision process. I’m currently doing my last read-write through before handing it over to my wife Sheila for review.

Part of learning more about creating with either multiple pov’s or settings, is the transition jumps from differing pov’s, or to other settings – either via segment or chapter breaks.

Hat tip and thanks to some timely feedback from Anne Francis Scott. It deepened my look at how I was transitioning chapters in my new thriller “Queen”, from one point of view to another, often to another setting as well.

What I’ve tried to do with my samples below, is show where, I feel, I’ve softened the transition to a new character’s point of view and/or setting, vs where I haven’t, and why.

Please Note: all work is © 2015 Felipe Adan Lerma and will be submitted for registration with the Library of Congress.

The idea was whether to use an abrupt or smoother transition between chapters, especially when changing either the pov character or setting or both.

As in most things, the difference between a smooth vs abrupt transition is relative.

There’s lots smoother and lots much more abrupt around 🙂

My goal was to fit the story on hand.

“Sorry you forgot your allergy meds,” Antone told her. “We can get some tomorrow.”

“I guess,” said Cherise, seeing Sam motioning them to catch up, “anywhere you go there’s something in the air.

Raven and Stilo continued arguing which way of providing drugs was best.

“We can’t even talk on burner phones anymore without being tracked,” Raven said.

With a nudge on the man’s back, Stilo pushed him into the blade.

When you’re boss, some lessons are only by example.

It was good yoga, I told myself.

I felt my lips stretch and spread into a tiny smile. Such mindfulness, I teased myself.

As thriller writer and attorney Andy Updegrove has mentioned in comments threads plus his own blog and FB posts, “I think that you’ve tee’d the styles up nicely, and also, I think, provided a very good example of why no rule should be applied at the expense of the final product…This would make a very nice textbook example, to my way of thinking, of an example where the right answer is to take the best of both versions and combine them.”

Part of the creative process, sometimes maddening, more often exhilarating, is weighing the impact factors of our choices.

The more I write, the more conscious I’m becoming (then have to let go to go spontaneous again) how “x” amount and type of dialog, description, interior thought or feelings, affect the pacing and emotive quality of the story.

It’s become not so much, which is right, but right for what purpose.

Some folk will love it, others not, but that’s true of everything.

So just make sure it’s also right for you, the creator.

Jump-Cuts : A Style for Short Chapters and Point of View and Setting Shifts