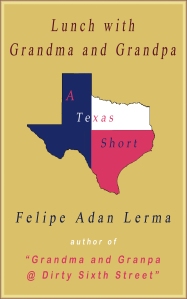 Lunch with Grandma and Grandpa
https://amzn.to/32uuvIt

“the intent of this blog is to incrementally build a body of thought that works toward integrating various topics, yoga, fitness, and the arts – it’s a process…”

Poetry in Fiction, Samples – Grandma and Grandpa in the Latin Quarter

Though each digital outlet usually has a preview capability, what is previewed to the reader varies tremendously.

Some outlets have pre-determined unalterable percents, and some, like Smashwords, allows the writer to set the percent, which then is passed on to where the book is distributed. But even then, the receiving retailer may have their own set limits.

What I want to be able to present to a reader, is at least 10% of the actual content.

Of the story. Or photo-memoir. Or photography. Or poetry.

This new series on my site allows me that.

Lunch with Grandma and Grandpa

Grandma and Grandpa initially take four of their six grandchildren to lunch. When that doesn’t work out as planned, with lots of quirky family and Austin moments along the way, they go back home, get the other two grandkids, and walk to a nearby restaurant. Where more family stuff happens.

Arturo had his youngest daughter’s SUV. Katarina didn’t mind. Arturo and Rosetta were taking her two boys, Buzz and Zilker, to lunch. With a promise, courtesy of Katarina’s husband, of freshly baked homemade bread and desserts on their return. He and Katarina would meet the returning lunch bunch at the tweens’ house.

Yes, Simone and Tabitha, her brother’s two tween girls, would also be tagging along; but, Katarina smiled, that was her parents’ good fortune, or problem, depending how the combined “lunch” with Buzz and Zilker went.

Katarina watched through a front window, the curtain discretely pulled aside, as Arturo began pulling out of the drive, looking both ways, more times, and much longer, she smiled again, than it would have taken to just pull out and go. One of the boys, then the other, saw her watching, waved, and they were gone, as Arturo finally, but swiftly, swung west onto the road and headed toward her brother Arthur’s house to get the tweens.

She felt herself relax the grip she had on the kitchen towel, tightly gripped in both hands. Smiled more distantly, wondering what adventures they might encounter with their grandparents this time, and returned to her kitchen. This would be a good time, she thought, languishing in the quiet beginning to fill the house, to clean the burners.
*
Noon traffic, from Travis Heights to nearby Bouldin neighborhood, was already dense with hungry drivers. Mostly students returning for the new fall semester at one of Austin’s many colleges. And Simone and Tabitha, the two young boys’ older tween cousins, still needed picking up. Though several restaurants and food courts were within walking distance of the girls’ house, the children had quickly decided, and declared, they’d rather “go” somewhere.

The kids’ parents thought it was a big bother driving elsewhere, the children thought it was an adventure, and Rosetta and Arturo thought it might be fun. It was like raising their children all over again, but without the day-to-day, minute-to-minute responsibilities. An aging gracefully cliché the two grandparents agreed was worth keeping.

Having learned to Skype the year before, while in Paris, the family had quickly conference called to arrange the luncheon outing. Arturo and Rosetta had learned in Paris, one noisy Skype call among the children, was worth a dozen separate pass-along, misunderstood, individual phone calls and texts.

“Walking to Mercado or Torchy’s is going some where,” Arturo had laughed, arguing playfully.

“Tell him, Grandma,” Zilker had chimed in.

Buzz, who had been unusually silent, had given a little cough. He had just learned his two oldest cousins weren’t tagging along. Antone and Cherise, having learned in advance their four younger cousins were all going, seemed to have a sudden strange mixture of headaches, allergy flair-ups, not being hungry, and, “uh..other plans.”

“Why aren’t Cherise and Antone really coming?” asked Buzz, as Simone and Tabitha approached the vehicle.

“Hey,” Simone said, before either Arturo or Rosetta could answer. “We ride shotguns in the real seats. You guys get in the back.”

“Girls, get in the back. You can ride the middle seats on the way back.”

Simone frog-poked Buzz in the biceps, and bumped him with one slim hip as she scrambled over to the back folding seats with Tabitha.

Rosetta half turned in her seat to glance at her four youngest grandchildren.

Buzz shrugged, turning his head sideways then up, twisting his lips a mock effort of not sulking.

Rosetta looked from girl to girl, then to Buzz and Arturo, and back to the girls.

She gave her second youngest grandchild a sad but firm smile.

“Maybe you’re right,” she whispered into the car.

Eyes firmly on the road, Arturo added, “He’ll come next time,” braking to avoid rear-ending a white car cutting him off. Glancing in the rearview, he saw another car tailgating him, the driver’s head bent down, as if reading something, and saw Tabitha and Simone turned toward him, waiting with wide eyes.

Arturo forced a smile, remembering, not to leave anyone out. “And Cherise.”

The promise of reuniting the six cousins seemed to calm everyone: the girls, the boys, Rosetta, and the traffic. Even the girl driving behind them, hair billowing toward her open window, seemed to have pulled back a touch and was looking straight ahead.

After the family’s extended stay in Paris the previous fall, and the six children’s robbery adventure on Sixth Street in Austin, the four younger cousins were clearly missing having Cherise and Antone, their semi-protectors, aboard.

A car in the lane to the left of them, honked, made a U-turn.